THE PLACE OF THE BLESSED “What will it profit a man if he gains the whole world, yet forfeits his Soul? Or what can a man give in exchange for his Soul ?” Matthew 16:26

One will suffer no loss to his Soul when he is led by the Truth of God.

This is the situation where you will stay awakened with the means of knowing the knowledge of the Father and the revelation of His Son.

When your heart and Soul stay firm in your faith to God, then the morning comes and you know that the fear that you had experienced was nothing.

Your Soul will know the Place of the Blessed, as you are not ignorant of the Father. He is the one whom you see. You fear no more, there is no more confusion and a lack of confidence. There is no more double-mindedness and division in your heart. 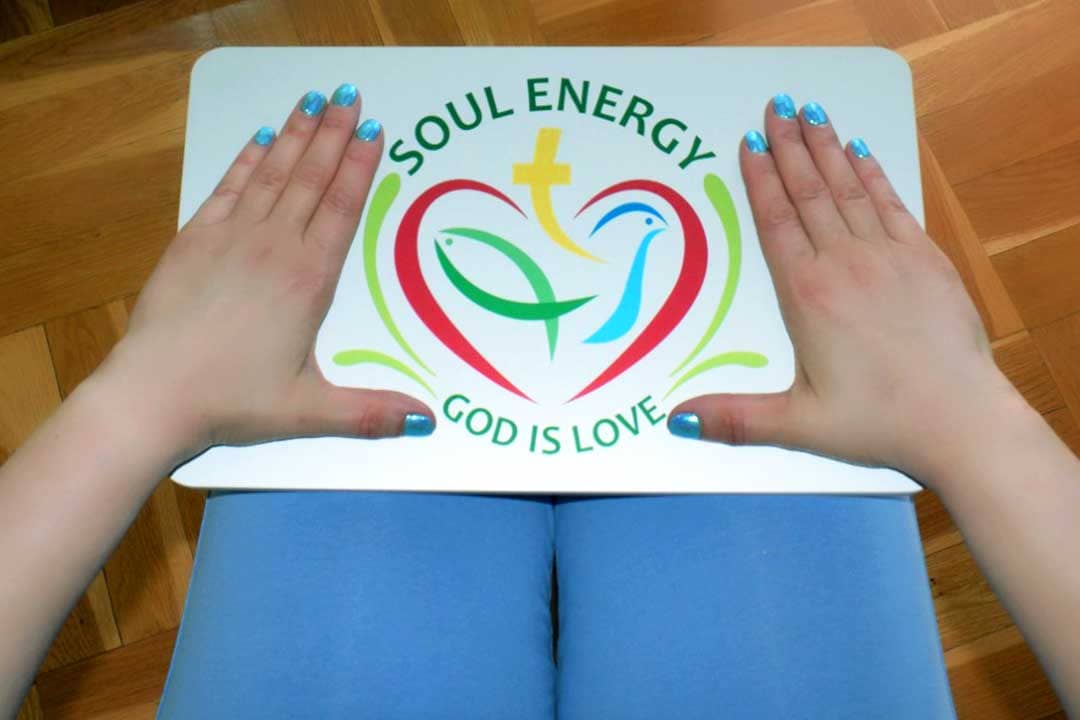 Important: By breathing the Energy of your Soul Energy Noosphere Regulator into your Energy Field you manifest in the Quantum Field your desire to connect with the Supreme Consciousness of God.

Sit down and put your Soul Energy Noosphere Regulator over your legs above your knees, then put your palms over it and say the “Jesus’ Prayer” as it shows us the way towards true humility – “Lord Jesus Christ, Son of God, have mercy on me, a sinner” or the “Lord’s Prayer”.

This is very important because in this way your Soul will start communicating with the Spiritual Energy (Word of God) which is inside your Soul Energy Noosphere Regulator!

The power of Praying to God, coming from your heart, means you are ready to open it and to receive the Lord as your Savior.

Now when you manifest your faith in God by praying toHim and while still keeping your palms over your Soul Energy Noosphere Regulator take a deep breath, inhale the air coming as Divine Light from your Soul Energy Noosphere Regulator through your nose and keep the inhaled air in your body for at least three to four seconds. Now exhale the air slowly through your mouth towards your whole Bio Field and repeat the process of breathing for two to three minutes. Even more, if you want. It is always up to you. There is no strict timing.

You are relaxed and ready to allowing your mind to start listening to your heart.

Start reading the following texts from the Scriptures chosen by me for this Spiritual Practice.

The Gospel of Truth (Nag Hammadi Codex I and XII)

The Nag Hammadi Library, a collection of thirteen ancient books (called “codices”) containing over fifty texts, was discovered in upper Egypt, in 1945. This immensely important discovery includes a large number of primary “Gnostic Gospels” – texts once thought to have been destroyed during the early Christian struggle to define “orthodoxy” – scriptures such as the Gospel of Thomas, the Gospel of Philip, and the Gospel of Truth. The discovery and translation of the Nag Hammadi library, initially completed in the 1970s, has provided the impetus to a major re-evaluation of early Christian history.

JOY TO THOSE WHO KNOW THE FATHER

The gospel of truth is a joy for those who have received the truth and grace of knowing him from the Father. This all happened by the power of the word. Who has come from the fullness and who is in the thought and the mind of the Father? This is the one who is called the saviour since that is the name of the work that he must do for the redemption of those who have not known the Father. For the name of the gospel is the revelation of hope, since that is the discovery of those who seek him because the realm of all sought him from whom it came. You see, all was inside of him, that illimitable, inconceivable one, who is better than every thought.

THE PLACE OF THE BLESSED

Each one will speak concerning the place from which they have come forth, and to the region from which they received their essential being. They will hasten to return once again and receive from that place, the place where they stood before, and they will taste that place, be nourished, and will grow. Their own place of rest is their fullness. All the emanations from the Father, therefore, are fullness, and all his emanations have their roots in the one, who caused them all to grow from himself. He assigned their destinies. They, then, manifested individually that they might be perfected in their thought, for that place to which they extend their thought is their root, which lifts them upward through all heights to the Father. They reach his head, which is rest for them, and they remain there near to it, as though to say that they have touched his face by means of embraces. But they do not make this plain. For neither have they exalted themselves, nor have they diminished the glory of the Father, nor have they thought of him as small, nor bitter, nor angry, but as absolutely good, unperturbed and sweet. They know all the spaces, which existed before they did and have no need for instruction.

Such are they who possess something from above of this immeasurable greatness, as they strain towards that unique and perfect One, who exists there for them. And they will not go down to Hades. They have neither envy nor moaning, nor is death in them. But they rest in him who rests, without wearying themselves or becoming confused about truth. But they, indeed, are the truth, and the Father is in them, and they are in the Father. They are perfect and inseparable from him, who is truly good. They lack nothing in any way, but they are given rest and are refreshed by the spirit. They listen to their root; they are busy with concerns of which one will find their root, and which one will suffer no loss to their soul.

Such is the place of the blessed; this is their place. As for the others, then, may they know, in their place, that it does not suit them, after having been in the place of rest, to say anything more. It is there I shall dwell in order to devote myself, at all times, to the Father of all and the true friends, those upon whom the love of the Father is lavished, and in whose midst nothing of him is lacking. It is they who manifest themselves truly since they are in that true and eternal life and speak of the perfect light-filled with the seed of the father, which is in his heart and in the fullness, while his spirit rejoices in it and glorifies him in whom it was because the father is good. And his children are perfect and worthy of his name because he is the father. Children of this kind are those whom he loves.

JESUS IS THE FRUIT OF KNOWLEDGE

That is the gospel of him whom they seek, which he has revealed to the perfect through the mercies of the Father as the hidden mystery, Jesus the anointed. Through him, he enlightened those who were in darkness because of forgetfulness. He enlightened them and gave them a path. And that path is the truth that he taught them. For this reason, an error was angry with him, so she persecuted him. She was distressed by him, and she was made powerless. He was nailed to a tree. He became a fruit of the knowledge of the father. He did not, however, destroy them because they ate of it. He rather caused those who ate of it to be joyful because of this discovery.

And as for him, he found them in himself, and they found him in themselves, that illimitable, inconceivable one, that perfect Father who made all. In whom the realm of all is, and whom the realm of all lacks since he retained in himself their perfection, which he had not given to all. The Father was not jealous. What jealousy, indeed, is there between him and his members? For, even if the eternal being had received their perfection, they would not have been able to approach the perfection of the Father, because he retained their perfection in himself, giving it to them as a way to return to him and as a knowledge unique in perfection. He is the one who set all in order and in whom all existed and whom all lacked. As one of whom some do not know, he wants them to know him and love him. What did they lack, if not the knowledge of the Father?

Now read the Words of our Lord Jesus Christ, again and again, He is the one speaking here.

Think over them and close your eyes.

The level of this knowledge is higher and more difficult to be understood. But you have to grow in your soul salvation and I think you like receiving knowledge on a deeper level.

Feel the Divine Light of God that illuminates you, purifies your energy system and by increases your own energy vibrational power. That way you escape from being in the darkness.

Right now, in this very special moment inhale the air from your Soul Energy Noosphere Regulator and visualize how the Divine Light of the Lord is entering your body through your navel and then fulfilling every Energy Center of yours while you still keep the inhaled air in your body for 3 seconds.

See and feel how you will suffer no loss for your soul from this moment.

Then exhale the air from your mouth visualizing it going to and fulfilling your Heart Energy Center!

Now repeat the same breathing practice once more but exhale the air from your mouth to your Crown Energy Center!

Now repeat the same breathing practice once more but exhale the air from your mouth to your Third Eye Energy Center!

Now pray for mercy and open your heart for God by saying this prayer:

“Lord Jesus I need you. Thank you for dying on the Cross for my sins! I open the door of my life and receive you as my savior and Lord. Take control of my life. Make me the kind of a person you want me to be. Amen”

By practicing during your praying and meditation time with your Soul Energy Noosphere Regulator, it increases the divine light power of your Spirit and makes it alive so that God can speak to you.

You already rest in the Lord without being confused about the truth! You are indeed the truth as Lord is in you and you are in God and you are already inseparable from your Creator.

There is no more never-ending emptiness as you are full of the Infinite Divine Light of your Savior.

You can fight the passions within you (anger, egoism, self-justification, haughtiness, judgement, lack of patience and compassion) and turn them into powers. It brings you back on the path of the Divine Light and protects and saves you from sin and its consequences.

You lack nothing in any way, but you are given rest and you are refreshed by the Spirit.

shop now
Back to all practices